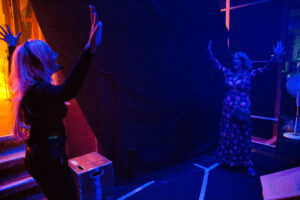 The purpose of the trip was to meet Steve Rebbeck who is the Technical Director of the RSC to get an insight into how their technical and production departments operate.
Steve gave us a tour around the Royal Shakespeare and The Swan Theatre as well as their production offices, costume, set and prop making workshops and backstage areas (and their armoury which was pretty amazing!). We had the opportunity to talk to some of their production managers and staff in all different departments the head of lighting and sound and head of automation and talk to them about their processes, equipment etc.

We also managed to take a sneak peek at a tech rehearsal for their Christmas Show ‘The Magician’s Elephant’ before watching the show in the evening. No spoilers but it was brilliant – well worth a watch if you are down there.

It was great to see how an organisation the size of the RSC which has 4 venues plus touring shows (but is, like the Royal Court, entirely self-producing) gets it shows on stage. It was great to draw parallels with how we do things and get some ideas of how we might like to do things in the future. Especially with projects like the Everton Mint in development.

I think that we have learned a lot and we’re looking forward to using some of their procedures here at The Court.

What’s Going On In Community Education?

Susan is a long term member of our Community Choir and she recently performed in Homebaked The Musical. This is her story:

I joined the choir on the very first session (12th March 2012) and I’ve been a part of the choir ever since, I was 15 when I joined and I’m the only original member left. 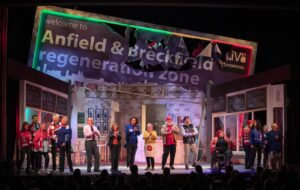 I struggled a lot with being bullied in school and I had very little confidence, but joining the choir and meeting Jay helped me, not only is he a brilliant choir master but he has helped me with my confidence and because of this I auditioned for 3 shows here at the theatre.

During the pandemic we moved choir sessions online and it was difficult for me as I loved the social aspect of the choir and I was missing everyone there and doing gigs.

When the chance to audition to be in the show Homebaked came about I was quite excited as it is a show about a bakery in Anfield, and with me being a fan of football and being a big Liverpool supporter it sounded like an awesome show to be a part of.

The rehearsals were amazing and just getting to be around people from the choir again made me so happy because I had not seen them in person since March 2020.

I have loved being a part of the show and getting to work with people like Eithne Browne and Paul Broughton has been amazing as I’ve seen them perform in a number of shows here in the past.

What’s Going On In The Kitchen?

Kitchen has been very busy since we reopened, both in the theatre and in Courtyard Bar & Kitchen. We are continuing to work hard to get some great food out so everybody can enjoy their pre-show meals.

Our Hoisin Glazed Baked Salmon is a healthy dish that has been one of the stars on the autumn menu at the theatre.

Although it seems quite complicated it is quite easy to prepare so long as you get your timings right. On a busy night we can serve this dish over forty times and it is one of the chefs’ favourites as it’s packed with flavour and can be plated up in seconds.

I thought that you might enjoy the recipe so you can have a taste of the Royal Court at home.

Method
Preheat your oven to 200C and line a small, shallow ovenproof dish with kitchen foil. Place the salmon fillets into the dish and brush generously with the hoisin sauce. Make sure the fillets are placed at least 5cm apart from each other. Cook for 15 minutes, or until the salmon is cooked through.
Meanwhile cook the rice according to the instructions on the packet.

Next, Half-fill a saucepan with water and bring to the boil. When the salmon is around five minutes away from being cooked add the tenderstem to the sauce pan and cook for around three minutes.

When cooked remove the tenderstem from the saucepan and place in a non-stick frying pan. Add the tamari sauce and the sliced chillis and fry on a medium heat for one minute.

While the tenderstem is frying, drain the cooked rice in a colander. Add the rice back the pan and stir in the sesame oil.

Divide the rice and broccoli between four warmed plates. Top with the salmon fillets and scatter with sesame seeds and chopped spring onions if using. Season with pepper and serve sprinkled with extra tamari, if needed.

What’s Going On In The Producer’s Office?

Ellen and Rigby reopened the theatre in July in a socially distanced way and was well received by audience and critics alike. 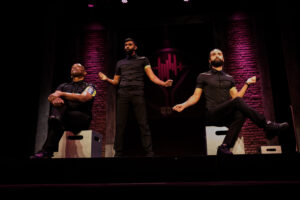 Boisterous Bouncers had another successful run, once again bringing in a newer and more diverse audience, and outselling previous runs.

Homebaked the Musical, our co-production with Red Ladder, has started srongly. The show incorporates a community chorus made up of members of a newly formed choir in Anfield. The professional cast is a mix of well-known Royal Court faces such as Eithne Browne, Pauline Daniels and Paul Broughton, as well as new actors to us – George Caple and George Jones. It also features the first wheelchair based actors to take part in a full main house show – Steph Lacey.

2022 is already mostly programmed due to the numerous rescheduled shows from 2020/21. YNWA, Mam I’m Ere and The Royal will all be remounted as well as the (much postponed) premiere of another Gerry Linford – Macca and Beth. We are hopeful that the Autumn will see another co-production but this does depend on other partners so we are still awaiting confirmation.

Longer term projects are also being developed. Ian Salmon is developing a musical telling the story of a group of students in Liverpool in the 80s and now through the music of Liverpool bands. Karen Brown is exploring a piece on the Vernon’s Girls and is in the middle of researching their stories. We are also working with the Liverpool Everyman and Playhouse for the first time to co-commission Maurice Bessman and Tayo Akinbode to write South, a musical set in 1940s Liverpool. South explores the relationships and racial tensions between the American GIs and locals in L8. It is provisionally pencilled for a slot in the Playhouse in Summer 2023.

What’s Going On Front Of House?

The past 3 months have been both exciting and challenging for all Front of House staff, trying to ensure audience have a great night out with us, whilst doing our best to follow all guidelines. 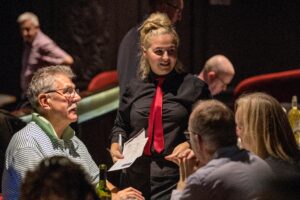 Staff are thrilled to be back at work, and the audience are loving being back at the theatre, it feels great to have full houses once again. We have managed retain the majority of our staff throughout the pandemic, and it was great to get everyone back together when we reopened.

We also had a great summer at Courtyard. We put on Live music nights, which was very popular, and gave us the opportunity to employ some of our regular singers and musicians once again. This also brought in a lot of our regular theatre audience and gave them the opportunity to see live entertainment, before the theatre was able to re-open. We have also introduced a small plates menu in the bar area, which has proved extremely popular, so has become a permanent fixture along side our pre-theatre menu.

We are currently preparing for, and looking forward to a very busy Christmas.

What’s Going On In Marketing?

Having relaunched the venue in April this year, the June to September period was mostly about delivering on our promises of providing a safe environment in which audiences could enjoy high quality shows. 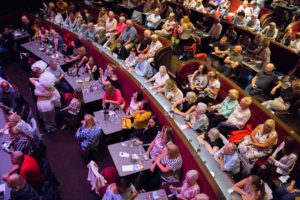 Initially the audience focus was on safety and public health so that became a large part of our messaging. As the months progressed and people began to get more used to sitting in large groups in public areas, the messaging changed to focus more on the benefits of social interaction after such a long period of solitude.

The first three shows post-pandemic were Ellen & Rigby, Bouncers and Homebaked The Musical. All were initially sold to 50% capacity in anticipation of social distancing measures being extended. This was the case for Ellen & Rigby but the show sold so successfully that we were able to extend by a week, in which we relaxed social distancing and increased capacity.

In July, when the government relaxed the social distancing rules, we decided to offer full capacity in stalls and socially distanced seating in circle or balcony for Bouncers and Homebaked – The Musical. We believed that it was best to give the audience the choice as our feedback showed that some bookers were still uncertain and needed that extra reassurance. As time has gone on, the vast majority of bookers have chosen to sit in the full capacity areas.

We are continuing to work with, Liverpool Empire, Unity Theatre and Liverpool Everyman & Playhouse. This collaboration is a conscious business decision to pool resources to promote theatre as a whole both in the region and beyond. We will be creating a joint Christmas campaign and putting out a joint press release to launch our new seasons.

In terms of staffing: Iain Christie, Head Of Marketing, has returned to full time hours, as has freelance Graphic Designer Jamie Jenkin. Clara Mbirimi (a former member of our Youth Theatre) has joined the team as a full time Marketing & Social Media Officer and Kofi Ohene-Djan is working for one and a half days a week as a freelancer. Both are settling in very well and are good additions to the team.