Hello and welcome to our monthly blog where we catch you up on all the new and exciting things that have been happening in and around the theatre during the month. It has indeed been a very busy month in the theatre this June with the return or Mam! I’m ‘Ere! The building of windmills and the end of our first mentoring programme. Let’s catch up!

This month we seen the return of Stephen Fletcher’s hit show Mam! I’m ‘Ere! Which stars some of Liverpool theatre’s favourite names as well as some new faces. Kasey Ainsworth and Liam Tobin join the amazing cast this year, they’ve put their own fantastic spins on their characters and have had the audience howling with laughter. We’ve also had 4 disco divas join the team who have done a great job of keeping the audience singing and dancing along in our Boogie Wonderland. Amazing vocals from singing divas Mia Molloy and Mollie Cranmer and some brilliant moves from professional dancers, the dancing divas, Natasha Gooden and Shannon McFaddon. We also had the return of our fantastic band led by Musical Director Howard Gray who have provided us with some amazing hits and kept the audience up on their feet. The team behind the curtain have done a smashing job in bring Boogie Wonderland into life from the set designer to the technical director, a massive round of applause is deserved. Well done to the whole company.

The show has had an extension week added due to popular demand so make sure to come and see it before it finishes on July 16th! 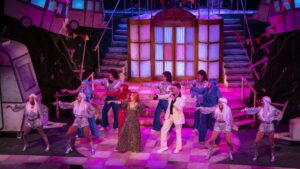 This month our technical and set design team have been working on a new project, Winds of Change. Winds of Change is a project with St Georges Quarter, commissioned by Culture Liverpool and supported by the Arts Council as part of a larger project that looks into animating different parts of the city during summer. The installation is a working windmill that celebrates the past, present and future of St George’s Quarter and its link to the industry and the development of the city of Liverpool as a whole. It will reflect all of the associations including the seasons, time, mind, life in a circle, sustenance sustainability and environment.

The structure’s façade is inspired by classic pottery design in homage to Shaw’s Brow, the original name for William Brown Street, which was the heart of pottery production in the city in the 18th century. At the time, a number of windmills lined the street to pump the water needed to create the product. The windmill will be there all through summer, located at the Wellington Monument Turing Circle outside St George’s Hall. 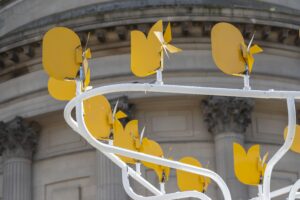 For the past 6 months we have been running a new mentoring programme along with Boisterous a black-led initiative to help address the fact there was a lack of talent development for people from Black, Asian and minority communities across the city region. This month marks the final month of the first run of our mentoring scheme. In the duration of this programme it has managed to support individuals form the minority ethnic groups gain insight into the creative industry both on and behind the stage. This programme has also allowed the mentees to create supportive learning relationships that share knowledge, experience and wisdom to assist and enrich professional development. Some of the skills they have been offered and learned include, acting, directing, writing, producing, light and sound, set design, makeup and costume, theatre management, learning and participation, community and education and also marketing.

Hearing from mentees they have been feeling better about their current job roles and the opportunities given to potentially change their job roles, they feel more prepared and aware of their full potential. Mentors have also gained from this programme, improving their leadership skills, confidence, self-esteem, motivation and overall skills within their sector.