Hello everyone, welcome back to our monthly blog were we catch you up on all the new and exciting things that have been happening in and around the theatre during the month. This August has been a great month with a lot going on. We’ve seen the amazing run of YNWA with such a great audience every show and the start of rehearsals for new show, The Scousetrap! Our youth theatre has also been busy at summer school and ended it with an stunning show. Other projects have also popped up around the theatre so let’s catch up!

This whole month we have had the run of YNWA – Let’s Talk About Six… Baby! It’s been an incredible show full of joy, tears and laughter. A journey that took the audience on a rollercoaster of emotions whilst telling them the story of Liverpool’s beloved football club. It is has been a joy to see the audience enjoying themselves nearly blowing the roof off our theatre with the singing! The reviews the show has received have been fantastic, all the talented actors, singers and musicians have been praised endlessly through the run. Not to forget the writer and director who have done a fantastic job in creating this phenomenal show. It’s not just press reviews either, the audience themselves has left some amazing feedback all across our social media channels about how much they have loved their night out at The Court. 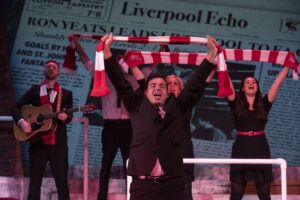 This August we were graced with the presence of many young aspiring actors, dancers, musicians and more young creative individuals in our summer school. They spent four weeks of their summer with our amazing tutors learning new skills to improve themselves and it was well shown in their end of summer school show they put on.

In the first few days they took a teambuilding workshop were they learned a lot about working together and listening to each other. This would come in handy for the rest of the weeks to come as they would be working together a lot. During the first three weeks the kids worked on learning and perfecting new dances that they could fit into the show. Much time was spent learning to sing in groups, through this they also learned about listening to each other to sound good, which taught them more about teamwork. Finally they spent most of their time putting together scenes to fit into their final show: Dreamteam! They spend many hours improvising, self-directing and perfecting their scenes to put together an amazing show. We can’t wait to see them on our big stage one day. 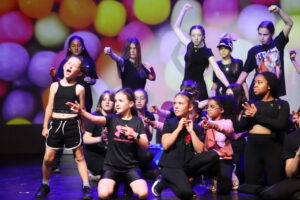 The World Reimagined is a ground-breaking, national art education project that aims to change how people understand the Transatlantic Slave Trade and the impact it had and still has on all of us. The project has set up a trail of Globes designed by artists to be installed around the UK.  There 103 unique globes across the UK exploring the history, legacy and future of the Transatlantic Trade in Enslaved Africans through the work of incredible those artists.

Here in Liverpool, the region-wide trail will run from 13 August to 31 October and aims to provide an enjoyable and thought-provoking learning experience for people of all ages. The trail will be the centre of a broader learning and engagement programme, with schools, community groups, and cultural institutions from across the city region taking part.

In addition to the larger globes, another 41 smaller learning globes will be created by 30 schools and 11 community organisations across the region. Through the education and art programme, the project will be rooted in local schools and communities to facilitate dialogues around racial equality and justice and linked deeply to where people live.

A Globe painted by Unity Youth and Community Centre, Liverpool

This month we have seen the beginning of the rehearsals for The Scousetrap! A brand new show that will be gracing the stage in September. This is going to be our newest show written by Kevin Fearon and Cal McCrystal with Cal also being the director. Working with him will be a great cast of amazing actors, some new and old faces. We will see the return of some familiar faces from past shows including the amazing Eithne Browne who we last saw last year in Homebaked, we can’t wait to have her back on that stage. Other familiar faces will include Liam Tobin who was recently in Mam! I’m ‘Ere and The Scouse Sleeping Beauty alongside Keddy Sutton who will also be gracing our stage in The Scousetrap. Joining them will also be the talented Zain Salim who directed and starred in Bouncers last year. Helen Carter will also be joining the team and she has just been in an amazing studio show, Offered Up! Lastly joining them will be some new fresh faces who are David Benson, Gabriel Fleary and Jack Lane, who we can see are already amazingly talented and will definitely bring that Royal Court style humour and energy. We’re excited to see them become part of the Royal Court family!